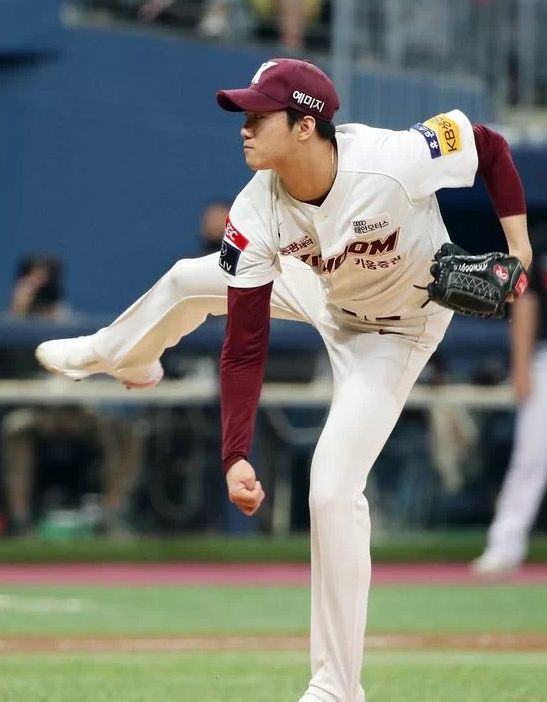 Ahn Woojin (23) of the Kiwoom Heroes opened his eyes to sliders when he was a student at Whimoon High School. It wasn’t a new ball. However, it changed the way it was thrown. “When I was in high school, my coach emphasized, ‘You have to throw a slider like a fastball,'” he said. “To fool the batter’s eye, the ‘(pitch) tunnel section’ must be long, and to do so, it must be bent in a trajectory similar to a fastball.” “Since then, I’ve thrown a lot of sliders,” he recalled.

“Throwing a slider like a fastball” is linked to the use of the wrist. Ahn Woo-jin stressed, “The most important thing when throwing a slider is not to twist (the wrist) but to throw it the same as a real fastball.” He changed his slider pitching movements as advised by the coach. It may be unfamiliar, but I tried to get used to it. When pitching, he found the best pitching angle by pressing the ball differently. As a result, Ahn Woo-jin’s high-speed slider, which is launched from the fastball pitching foam, was completed.

There were also difficulties. Ahn Woojin said, “When I played catch in high school, I threw a ball to the wall. He said he would throw a slider, but I thought he could get hit (the player receiving the ball) if he flew like a fastball. “It could be a nuisance, so I practiced looking at the wall,” he said with a smile. He then said, “Even if I tell the catcher, ‘It’s a slider, but it can fly like a fastball,’ he said, ‘What kind of slider is this?’ (Holding the slider grip and throwing it like a fastball) I think I have to deceive myself,” he said meaningfully.

Ahn Woo-jin’s slider wore wings after joining the professional team. Wearing the Heroes uniform as the first designation in 2018, he said, “When I threw my first slider in the professional league, my speed was from late 130km/h to early 140km/h. He said, “As I trained systematically, not only fastballs but also slider speed naturally increased.” According to Sports2I, a baseball statistics company, Ahn Woo-jin’s average slider speed this season is 141.4km/h, and his maximum speed is recorded up to late 140km/h. It is faster than most pitchers’ fastball speed. The batting average of the ball type is also high at 0.173. It was the driving force behind the team’s No. 1 strikeout (224) and ERA (2.11) in the regular season this year.

Ahn Woo-jin’s high-speed slider is considered the most difficult pitch to hit in the KBO League. This is because the slider “throwing like a fastball” exquisitely passes through the “pitch tunnel.” The pitch tunnel refers to the section from the moment the pitcher throws the ball to the time the batter determines the type of pitch.

If the difference between fastballs and breaking balls is not large, the batter will not have enough time to judge the type of pitch. When using fastballs and sliders, Ahn Woo-jin’s pitching form is almost the same. The fastball speed (average 152.6km/h) is fast, but it is more difficult to cope with it because it is fast until the slider speed. He said, “Because I throw it like a fastball, I think batters think of the slider as a fastball because of the ‘tunnel section’. “Thanks to that, the number of home runs (four) has decreased a lot this season,” he said. 코인파워볼

Ahn Woo-jin’s power was proved in Game 5 of the semi-playoff (semi-PO, three wins in five games) on the 22nd. He showed his “strength” in the crisis of second and third bases with one out in the top of the sixth inning with a 4-2 lead. In the ball count 1 ball-1 strike, he put a 148km/h high-speed slider on the third pitch toward the right-handed batter Hwang Jae-kyun’s body. Perhaps because he judged it to be a fastball, Hwang Jae-kyun’s batting posture collapsed and he managed to clear it with a foul. However, in the end, the bat turned in vain on the fourth fastball of 155km/h. It was a combination of fastballs and sliders ‘two pitches’, but it was more powerful than that.

Ahn Woojin, who has a high-speed slider at the forefront, was named the MVP of the semi-PO series. He started two semi-PO games and pitched 12 innings and struck out 17 times. Most of the winning shots were sliders and fastballs. The batter’s bat turned helplessly to the point where he knew it.

Ahn Woo-jin is also the most eye-catching player in the playoffs (PO) against the LG Twins with one win and one loss. Attention is focusing on how he will deal with LG hitters, who will start Game 3 of the PO on the 27th. Kiwoom manager Hong Won-ki said about Ahn Woo-jin, “I don’t feel like I’m at the peak yet.”