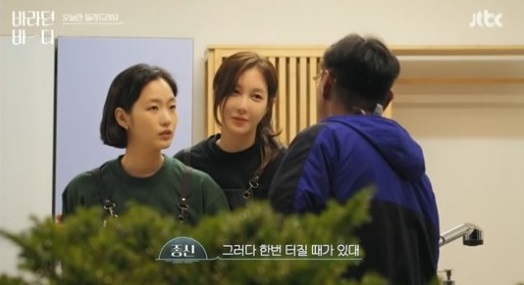 Actress Lee Ji-ah confessed that her tears disappeared as she got older.

JTBC’s “The Sea I Wanted,” which aired on the 10th, left for music part-timer Sunwoo Jung-a and the second coastal village of Goseong in Gangwon-do.

Asked if he had more tears on the show, Yoon Jong-shin replied, “It has become more than 50.” On the other hand, Lee Ji-ah said, “I disagree. “Now I’ve been through a lot and nothing makes me sad.” In response, Yoon Jong-shin expressed his seniority by saying, “I heard there are times when it explodes.”

Kim Go-eun said, “I’m crying a lot to the point of being silly,” adding, “I’ve been drinking with my dad lately, and I’ve rarely seen him cry in my life.” But suddenly, I said to my brother, “I’m not good enough, but I’m getting so much love compared to him.” Thank you for being proud of me,’ he cried. I cried more when I heard that 광주호빠

Yoon Jong-shin said, “Tears in his 50s are tears of enlightenment. “But I feel sorry for why I realized that now.”