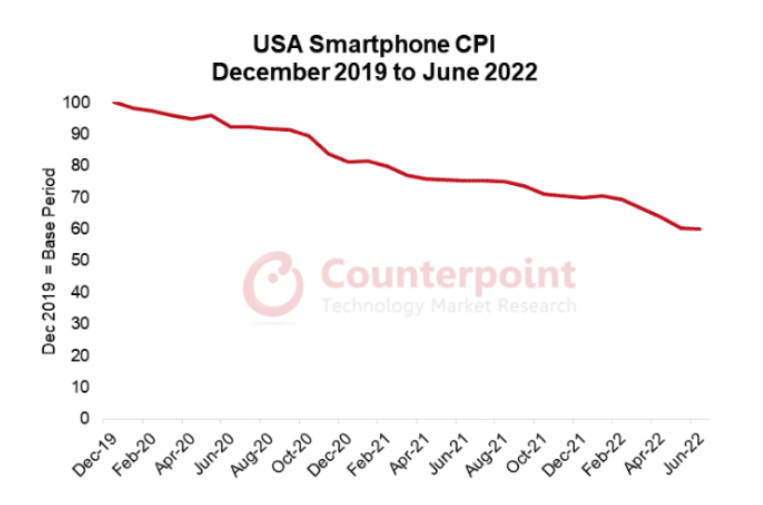 As a result, the United States is now suffering from the highest inflation rate since the mid-1980s.

In this situation, only smartphones attracted attention as their CPI fell sharply during the same period. According to CNBC on the 17th (local time), the CPI of smartphones fell by a whopping 22% in September.

At first glance, it is a result that is not well understood. This is because the price of high-end smartphones released by Samsung and Apple continues to rise. The average selling price of smartphones is also steadily rising.

This means that smartphone prices are not getting cheaper. But why is the CPI falling steadily?

CNBC pointed out, “The answer is how to calculate CPI.” This is because CPI calculates the index by comparing the same items. For example, if you look at the egg CPI, you will compare last year’s price with this year’s price.

However, the situation of smartphones is a little different. This is because the quality of the parts is improving every year.

The U.S. Department of Labor reviews new smartphone models twice a year and measures how much quality has improved. For example, we will examine how much the camera has improved and how much display or other performance has improved.

CNBC explained, “If the quality of smartphones improves and the price remains the same as last year, the U.S. Department of Labor will record the price as falling.”

Counterpoint, a market research company, also analyzed the decline in the smartphone CPI index in July.

At the time, Counterpoint pointed out that CPI does not properly reflect quality improvement factors, but also tends to ignore companies’ promotions and discount events.

Counterpoint analyzed, “Although competition in the smartphone market is extremely fierce, the overall price has continued to rise in recent years if promotions and discounts are excluded.”

In the end, it may be an illusion that the price seems to have fallen because it has not removed the “noise factor” of the discount event of companies.

But again, the most important factor is quality improvement.

According to CNBC, it is the second half of 2019 that the Bureau of Labor Statistics uses as a reference point for smartphone CPI. At that time, Apple released iPhone 11 and Samsung released Galaxy S10.

In the end, looking at the CPI index alone, smartphone prices have continued to decline since 2019.

Jonathan Church, an economist at the Bureau of Labor Statistics, explained in an interview with CNBC, “Smartphones have entered a stage of rising prices and inflation, but this phenomenon is being alleviated due to improved quality.” 부산출장마사지