After Kim Goeun’s debut, it was too much to face. Slump at the time of goblin. 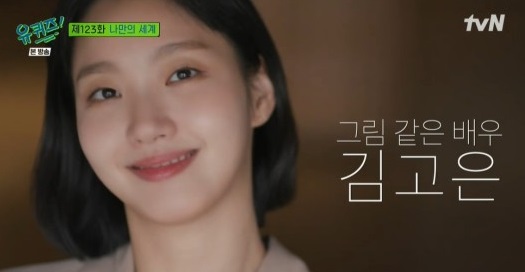 Actress Kim Go-eun reflected on her acting life from her debut that shook the film industry to a slump she couldn’t say.

On tvN’s “You Quiz on the Block,” which aired on the 15th, Kim Go-eun, Heo Seok-Kim Bo-sung, and model Choi Hyun-joon appeared to tell the story of their own world.

In particular, Kim Go-eun, dubbed “humanization of freshness” and “human watercolor,” appeared and captivated viewers with her honest and easy-going appearance. Kim Go-eun, who debuted with the movie Eungyo and has been an actor for 10 years, swept the Rookie of the Year award at the time of her debut and even thought about working as a rising star in Chungmuro, and when she decided, she thought, “Let’s think about the worst situation and start. He overcame the burden by talking to himself, so he was not shaken when he received attention, he said.

Above all, Kim Go-eun returned to Korea National University of Arts after her first work “Eungyo” was released. He said, “The work is something I have to do with people, but I think it will be too much to meet people.” He said, “I made a work called Byeonsan after concluding on my own that ‘I overcome it by doing a work that becomes a meal whether it is killed or not.'”

In particular, Kim Go-eun mentioned Park Jung-min, who worked together in Byeonsan, saying, “It was really big that there was an actor named Park Jung-min, and because it was a role that supported Jung-min, there was less pressure, and I overcame it all and finished the work.”

After his spectacular debut, he also followed a slump. Kim Go-eun was loved a lot for the tvN drama “Guardian,” but told the story that she actually suffered a slump.

Kim Go-eun said, “There is no opportunity to say that the work is going well, but I think I was a style of whipping myself.” He confessed, “I think I came big because I was crowded with things that I didn’t accept on my own, saying, ‘I’m talking about blessings.'”

When asked, “How are you living?” he said, “I’m living honestly.” I’m sincerely expressing my feelings to those I cherish and love,” he said. In addition, regarding the job of an actor, he said, “I think it’s a very grateful job for me. “As the years of experience accumulate, there is also a burden to do its part,” he added.

Finally, Kim Go-eun said, “I don’t want to stop doubting myself. “Am I a really good actor?” “Is this the right way?” I want to be an actor who doubts and continues to move forward. “If I don’t add suspicion, I think I’ll stop there.”