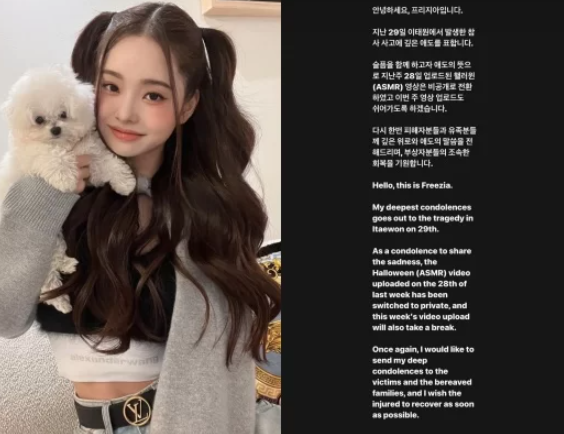 On the 31st, Freesia said, “Hello, I’m Freesia. “I express my deep condolences for the disaster in Itaewon on the 29th,” he said.

He said, “As a condolence to share the sadness, the Halloween (ASMR) video uploaded on the 28th of last week has been turned private, and we will take a break from uploading this week’s video.”

He added, “Once again, I would like to express my deep consolation and condolences to the victims and the bereaved families, and I hope that the injured will recover as soon as possible.”

On the 29th, a crush accident occurred in Itaewon-dong, Yongsan-gu, Seoul, as a large number of people flocked to commemorate Halloween. The government has designated a week as a national mourning period until 24 p.m. on November 5.