FT Island, large support for rental fees and equipment “It’s worth investing in” (The Idol Band) 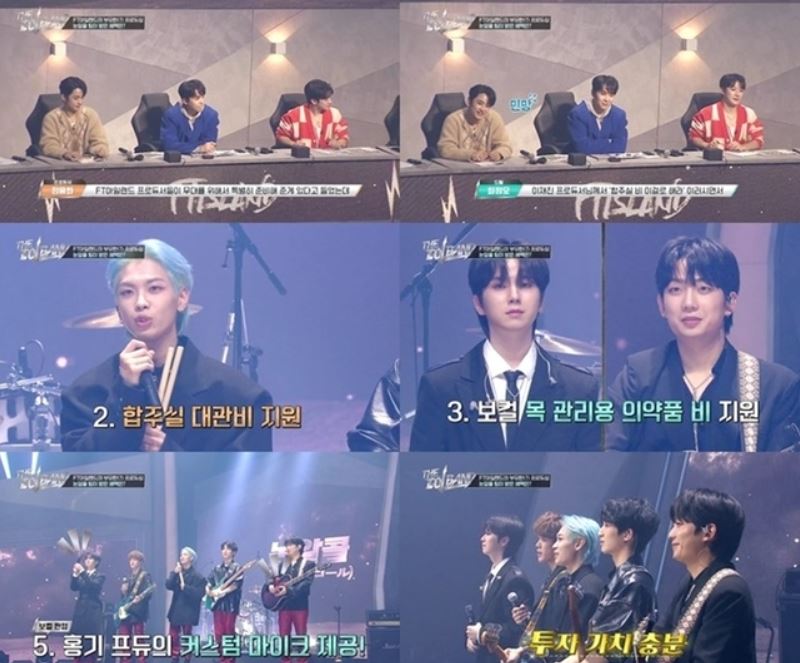 SBS M and SBS FiL survival program “THE IDOL BAND: BOY’S BATTLE,” which will air on January 10, will feature a full-fledged competition among participants with the first round mission “My Song” of the finals.

In response to FT Island`s support, Jung Yong-hwa asked, “Isn’t the expenditure too big?” and FT Island expressed deep trust and affection for its team members, saying, “It’s worth that investment.”

In addition, FT Island’s Lee Hong-ki and Lee Jae-jin said after one team’s stage, “This is really not working” and “I’m in trouble,” raising questions about what might have happened in the first round match.

Meanwhile, “The Idol Band” is a joint audition program between Korea and Japan that seeks idol boy bands with skills, visuals, and unique instrumental performances to lead popular music around the world.

They are a South Korean boy band that debuted on June 7, 2007 with FNC Entertainment.

The group name stands for Five Treasure Island, which means five treasure islands.It was Green Bean before the debut. Pea… Everyone was born in the 1990s at the time of their debut, and the average age is 15.7 years. The current members consist of main vocalist Lee Hong-ki, bass and sub-vocalist Lee Jae-jin, and drum Choi Min-hwan.
On June 7, 2007, he debuted with the title track “Love Sick” from his first full-length album on M Countdown, and three years later, he made his Japanese major debut with Flower Rock on May 19, 2010.
On June 7, 2017, he celebrated his 10th anniversary and released his commemorative album OVER 10 YEARS.
Main vocalist Lee Hong-ki’s solo debut Korean album FM302 was released on November 18, 2015, and Japanese album AM302 was released on December 9, 2015.
Sub-vocalist Lee Jae-jin’s solo debut Japanese album, scene.27, was released on October 9, 2019.
On September 30, 2019, member Lee Hong-ki joined the military as a boot camp of the 21st Infantry Division of the Army in Yanggu, Gangwon-do, and was discharged from the military on March 1, 2021.
On January 21, 2020, member Lee Jae-jin joined the military as a boot camp for the Baekgol Unit of the 3rd Infantry Division in Cheorwon, Gangwon-do, and was discharged on August 1, 2021.
On February 24, 2020, member Choi Min-hwan was discharged from the military on September 2, 2021, as a boot camp for the White Horse Unit of the 9th Division of the Army in Goyang-si, Gyeonggi-do.