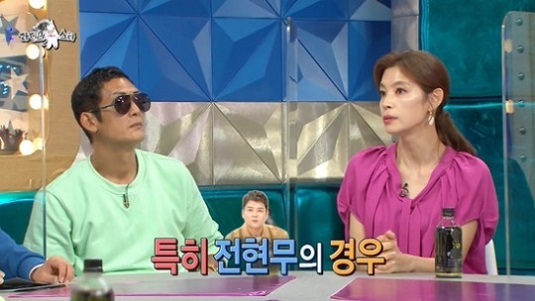 MBC’s entertainment program “Radio Star” (hereinafter referred to as “Radio Star”) aired on the 25th was decorated with a special feature of “Ungeumsagician” starring god Park Joon-hyung, former announcer Hwang Soo-kyung, online lecturer Jung Seung-je, and actor Kwon Hyuk-soo. Hwang Soo-kyung drew attention by saying that she has been waiting for six years for a call to cast “Radio Star.”

Hwang Soo-kyung said, “I made a pre-declaration in 2015, but there are people who don’t know yet. “I’ve been here for too long, and some people think I’m retirement, not a pre-declaration.” He said he didn’t call him on entertainment shows. In response, MC Kim Gu-ra would have been invited to places like “King of Mask Singer.” “I would have rejected the family entertainment program because it was burdensome,” he said, drawing laughter as if he had hit the nail on the head.

Hwang Soo-kyung unraveled the episode because of the noble image of the “Open Concert.” “He is the longest-serving announcer in a single program,” he said after 16 years of “Open Concert.” “I’ve given birth twice so far,” he said. “When I swear at my husband outside, he says, “Do you swear at your husband?” He even asked, “Do you go grocery shopping?”

Hwang Soo-kyung said she once shed tears because of Kim Gu-ra. “I was mentally challenged after the pre-declaration. When my brother overheard the radio, he said, “If Hwang Soo-kyung left KBS, the key personnel left.” It’s the same,’ he told me to cheer up. “I personally appreciated it because I got emotional when I heard it.” “KBS is the place where I dedicated my youth. But at some point, I felt limited and I didn’t feel like I was trying to challenge myself.

Hwang Soo-kyung said, “I never looked at the cue card and said it during the open broadcast of ‘Open Concert’.” “I thought it was disrespectful even if I was holding a cue card. “I never read the script and proceeded without a prompter,” he said, raising surprise. “Thanks to ‘Open Concert’, I’ve worn dresses to my heart’s content. Hwang Soo-kyung said, “There are about 800 dresses I have worn so far,” actively explaining the suspicion that she is wearing dresses at the broadcasting stations.

Hwang Soo-kyung said, “The most memorable public broadcast was during the Armed Forces Day special. Kim Tae-woo was a sergeant and Sung Si-kyung was below him, but there was a huge difference in his singing. “I’ve never seen Sung Si-kyung so intimidated,” he said. “I can’t sing, but I forced myself to sing it during the 1,000th special,” he said, confessing, “My heart still aches when I watch ‘Open Concert’.”

“In 1999, Queen Elizabeth II of England visited Korea and held a friendly concert in England,” Hwang Soo-kyung said, saying she was often the host of official events. It was broadcast live throughout the UK, when my wedding was in May and the event was in April. “I don’t know how they prepared for the wedding. In 2002, he also said he had traveled to North Korea for 15 days to host the news.

When asked, “I heard you gave a lot of counseling to your juniors who were preparing for the pre-declaration,” he said, “I didn’t stop them. I’ve been thinking about it for a long time. “In particular, in the case of Jeon Hyun-moo, no one stopped him because he knew everyone would go out.” When she made a free declaration, she got a lot of help from Oh Jung-yeon.

He also confessed that he was hurt by viewers’ criticism of his appearance. “I have big ears, so I can’t help it. Those comments were hurt.

He showed the appearance of his daughter’s fool, saying, “I said ‘dad’ when I was six months old.” A 4-year-old daughter sometimes corrects her Korean pronunciation. Later, when asked what she would do if her daughter said she wanted to get training from Park Jin-young, she said, “You have to be careful with what you say, but Jin-young is nice to women. “They gave us colored drinks and bottled water,” he said, drawing laughter. “It’s okay to leave it to Jinyoung,” he added 부산출장마사지

Lastly, a 4-year-old daughter said she had a boyfriend and that she would exercise a lot by the time she enters middle school, but she also drew attention by leaving a cool video letter to her future daughter’s boyfriend as a father.