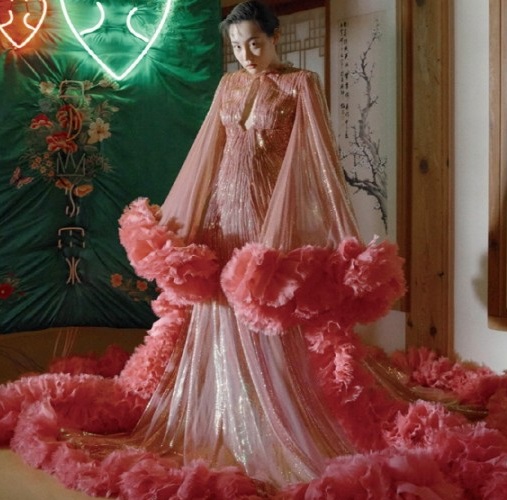 Actress Kim Min-ha, who has become a world-class actor by showing a brilliant performance in the Korean drama “Pachinko,” released both a fashion pictorial and a beauty pictorial at the same time.

Kim Min-ha shot a fashion pictorial with Choi Jeong-hwa’s representative work, which has played a pivotal role in Korean modern art since the 1990s, in the background of Ungyeong Historic House with modern and contemporary Korean history.

This filming is a special project with a representative Korean artist in a historic Korean house, and it has sublimated fashion into art in harmony with Kim Min-ha’s unique sacred atmosphere. In particular, it attracted attention with a sensuous style that added Korean elements reminiscent of Pachinko’s fairy, such as jade binau, jade ring, and socks.

In addition, in contrast to the fashion pictorial that showed unrivaled charisma, Kim Min-ha caught the eyes of viewers with her freckles in the beauty pictorial, giving off a pure and lovely atmosphere.

Meanwhile, Kim Min-ha played the role of Seon-ja on Apple TV + Pachinko, which was released in March.