Kim Sae-ron, who made an image of herself

Kim Sae-ron, who made an image of herself was sent to the prosecution on charges of failing to take action for drunk driving 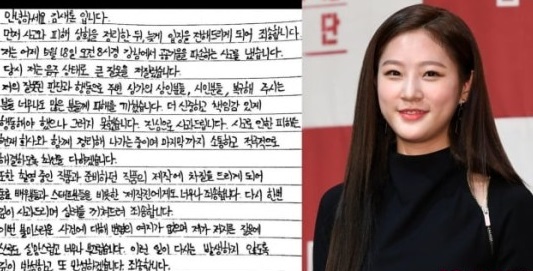 Actress Kim Sae-ron, who asked for a blood sampling test after a drunk driving accident. Blood collection tests revealed that the blood alcohol concentration was at the level of “cancellation of license.” The police will send Kim Sae-ron and his passenger in the car to the prosecution.

According to the Gangnam Police Station in Seoul on the 1st, Kim Sae-ron will be sent to the prosecution on charges of drunk driving and not taking action after the accident. The results of Kim Sae-ron’s blood collection test, which he received from the National Forensic Service the previous day, showed that his blood alcohol concentration exceeded 0.08%, which was the level of license cancellation.

Kim Sae-ron crashed into a transformer while driving under the influence of alcohol on a road in Gangnam, Seoul, at 8 a.m. on the 18th of last month. Kim Sae-ron fled in a broken vehicle and was caught by the police who were dispatched six to seven times after receiving a report that the vehicle was shaking severely.

Police confirmed Kim Sae-ron’s drinking through a breathalyzer at the scene. In the process of measuring the blood alcohol concentration, Kim Sae-ron wanted a blood collection test and collected blood at a nearby hospital.

The fact that he asked for a blood collection test when he was caught drunk driving was as shocking as drunk driving. There is a myth among some drivers that blood alcohol levels can be lowered by taking time to collect blood rather than taking breath tests at the scene. It was even more disappointing that Kim Sae-ron played a trick of “taking time” even in the absence of a situation.

Kim Sae-ron drove under the influence of alcohol at 8 o’clock. If it had rushed toward the road or a nearby store, not a transformer, there was a possibility of a life accident, not a structural accident.

When the transformer broke, the nearby store was blacked out at the same time. Due to Kim Sae-ron’s accident, the electricity was cut off, and nearby stores were unable to do business for three to four hours in the morning. Kim Sae-ron expressed his intention to compensate KEPCO for the broken transformer. KEPCO notified Kim Sae-ron that it would cost about 20 million won to replace the transformer, and is discussing compensation procedures.

Kim Sae-ron dropped out of the work one after another due to the drinking scandal. The SBS drama “Trolley” is before the shooting, so there is no major damage, but the problem is Netflix’s “The Hunters,” which has already been filmed. The “hunting dogs” said they are discussing Kim Sae-ron’s editing of the filming, but they decided not to participate in the additional filming schedule.

Kim Sae-ron, who had been silent despite the drunk accident, posted an apology two days after the accident. Kim Sae-ron said, “My wrong judgment and actions have damaged so many merchants, citizens, and people who recover from the accident,” and bowed, “We are currently organizing the damage caused by the accident with the company and will do our best to communicate and actively resolve it until the end.”

Kim Sae-ron, who gained fame through the movie “The Man From Nowhere.” Kim Sae-ron, the representative child actress of “Thank you for growing up well,” directly destroyed her career due to a drinking accident. I thought I grew up well, but I didn’t.

Kim Sae-ron is also likely to return after a break when the case is resolved and the compensation process is completed like a senior returning from drunk driving. It is not easy to get attention even if you can make a comeback. For actors whose image is life, especially for actors who are 22 years old, drinking accidents are a big flaw and scar.

Kim Sae-ron’s image crossed a river that cannot be returned. It remains to be seen whether he can recover even if he shows good work and performance