Lee Da-young and Jae-young completed the contract with 60 million won a year, PAOK head of the company said. 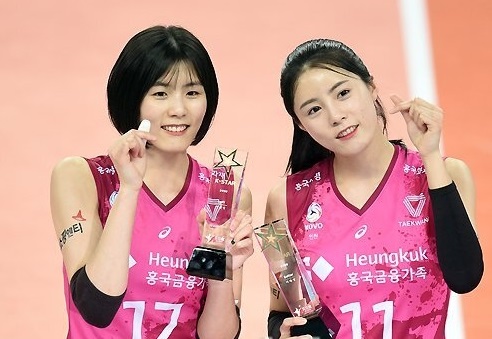 George Pogazotis, head of PAOK, Greece, where Lee Da-young and Jae-young sisters were transferred, said he had completed the contract with the two players. The annual salary has been confirmed to be around 60 million won each. The amount is much lower than the previous Korean salary. The two players have yet to step on Greek soil due to visa problems.

The interview was held at the volleyball team’s office at the PAOK Sports Arena in Thessaloniki, Greece, on the 23rd local time.

▲”I didn’t make an official announcement on purpose.”

It took a long time to persuade Foggiotis. “There was a reason why we didn’t make an official announcement about the recruitment of the two players,” he said.

According to Foggy Otis, the two players signed the contract and completed medical tests, but have yet to receive a visa from Greek authorities.

“I am having trouble communicating with the Greek consulate in Korea,” he said.

According to PAOK, the Greek consulate asked the two players to get a confirmation letter from the Korean Volleyball Association, saying, “There is no problem playing in Greece after leaving Korea.” The federation is not happy with the sisters’ overseas expansion.

In response, another PAOK administrative official said, “I have been in the process of signing contracts with several foreign players, but it is the first time that a consulate has requested this kind of document.”

Some have reported that the contract between the two players is being delayed due to the issue of the International Transfer Agreement (ITC), but Foggaotis dismissed the request, saying, “The ITC process has not even started yet.”

“The ITC process will proceed as early as the end of this month and early next month at the latest,” he said. “If the visa issue is resolved, there will be no problem with other documents.”

According to My Daily, the International Volleyball Federation (FIVB), the ITC-issued body, also has no problem with the two players playing in Greece.

“I often read articles about twins in Korean newspapers,” he said. “While I was searching for information by ‘googling’ twins, I thought it could be a good contract,” he said, explaining why he pushed for the recruitment.

When asked about the twins’ performance, he smiled and said, “No words can sacrifice.”

“The twins will be a great help to the team,” said Foggaotis, head of the team. “I believe the two players deserve the attention they have drawn to them.”

PAOK reportedly signed a contract with Lee Da-young first, and then offered Lee Jae-young a job through a Korean manager.

Information spread early among Greek journalists that PAOK recruited a “Korean superstar.” Greek media also reported on the controversy over school violence by the two players. Local fans don’t seem to mind much.

“There are so many fans of twins in Greece,” said Phogazotis, head of the company. “What happened in Korea will not be a big barrier for Greek fans.”

▲”Two foreign mercenaries arrived in Greece…All you have to do is come with the twins.”

PAOK recently recruited two foreign players in a row. In Korea, Milagros Cola, a former member of the Spanish national team, and Juliette Pidong, a Frenchman, will wear PAOK uniforms.

When the Lee Da-young and Jae-young sisters join, PAOK will have a total of four foreign players. In the Greek league, up to three foreign players can compete per game.

“We’re going to take all four of them with us,” said Foggaotis. “In the European Championship, all players will play their roles as they can use up to four mercenaries.”

“All the procedures except visas are virtually over,” he said. “We’re just waiting for the twins to enter the country.”