Minor League teams with crab on their asses making

Minor League teams with crab on their asses making headlines for Ugly uniforms. 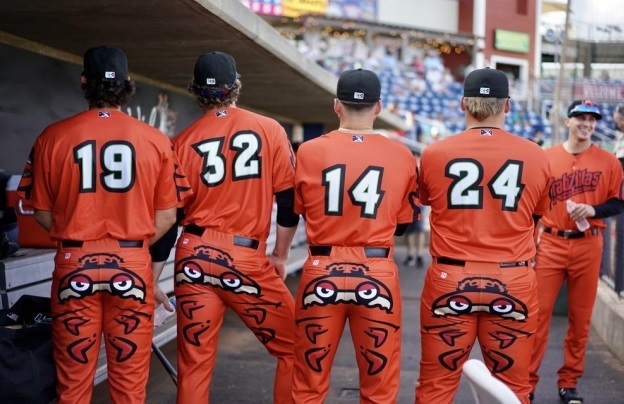 The Pensacola Blue Wahoos, a minor league double-A team under the Florida Marlins in the U.S. professional baseball league, are drawing attention for their bizarre design uniforms.

MLB Dotcom introduced the uniform on the 12th (Korea time), saying, “The weirdest design uniform in sports history came out.”

There is an ax-eye stuck in the hat.

Above all, the design under the uniform is unique.

A huge crab was painted on the hip.

The uniform was based on the club’s famous sandwich called Crabzilla.

The club prepared a “Crapzilla Day” event as the sandwich in 2019 became popular, and prepared a special uniform for it.

Pensacola decided to make the most ugly uniform. It was to attract attention from fans.

Jonathan Griffith, head of Pensacola’s product development team, said, “I thought it would be fun to see crabs running around the baseball stadium, so I designed this bottom.” “The uniform manufacturer looked at the draft design and asked again, ‘Is this really how we will make it?”

Pensacola’s strategy is a success for now. “Crapzilla Uniform” was introduced through local media such as MLB Dotcom. Fans are also showing enthusiastic responses.

Pensacola players do not continue to play in their uniforms.

He will wear it only once in a home game with the minor league Double-A team Montgomery Biscuits under the Tampa Bay Race at Pensacola Blue and Hughes Stadium in Florida on the 12th.

The 40 uniforms will be sold at auction online and offline after the match, and the proceeds will be donated to charity.

On the other hand, the Montgomery team also played in an unusual uniform.

Montgomery changed its team name to Montgomery Kimchi on the night of Korean heritage on the 16th of last month and ran in an orange uniform with “Kimchi” written in Korean.