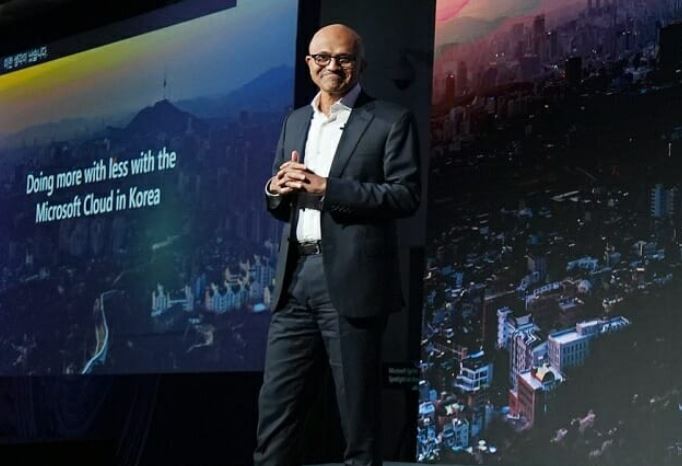 We are investing in technologies that help us achieve more with less effort and resources. To this end, Microsoft undertakes six initiatives that can be called digital destiny. This allows us to confront the challenges facing the world.”

Microsoft CEO Satya Nadella made the remarks in a keynote speech at the “Egnite Spotlight on Korea” held at the Grand Ballroom of the COEX Intercontinental Hotel in Seoul on the 15th.

Regarding cloud relocation, he said, “Moving digital assets to the cloud is the biggest change, and it is increasing efficiency,” adding, “By 2025, 95% of our work will be optimized for the cloud or move to a cloud-native environment.”

“If it is not included here, it will lag behind,” he said. “Microsoft is expanding its data center to improve future-oriented, and so is Korea.”

Microsoft Cloud builds its infrastructure based on On-Premise’s Windows Server, Azure Stack, and public cloud-in Azure, and manages the multi-hybrid cloud environment as “Azzer Arc.” Satya Nadella introduced the use of Azure Arc in Technopark, Chungbuk.

Regarding the next fate, “Artificial Intelligence and Data,” he said, “By 2025, the data created by generated AI will account for 10% of the total data,” adding, “Like many pictures created by instructing us to draw the future of Seoul, all products and experiences will be visualized with generated AI.”

“Microsoft intelligent data platforms can handle multiple types of mass data, connect databases and analytics in real time, leverage synapses, and manage all governance through perspective,” he said. “The reason why Microsoft creates these data fabrics is to accelerate digital transformation by eliminating the need for customers to combine them.”

He introduced Genius, a medical company that diagnoses and treats precise cancer with human genome information in Korea.

Regarding the third destiny, “Digital Convergence Team’s Growth,” he said, “Digital technology-related tasks are being created outside of the technology area,” adding, “70% of the apps to be created will be made with no-code and low-code tools, and it means that field experts and civic developers will join part of the digital transformation journey.”

He added, “To this end, we need to strengthen the convergence team’s capabilities, and Microsoft has created the best developer tools such as power platforms, visual studios, GitHub, and AzudevOps.”

He mentioned GitHub Copilot, which helps developers write code based on Codex, an open AI language model. “GitHub Copilot is an example of creating our products using AI technology,” he said. “We can create great innovation by making accurate codes through copilot and increasing the efficiency of developers.”

Microsoft Power Platform provides “Power Apps,” a no-code and low-code development tool, “Power Page,” an RPA generation tool, “Power Automate,” a chatbot development tool, and “Power BI,” a data utilization tool. The power platform is also adding new functions and products based on AI technology, and it recognizes the picture written on paper memo paper and makes it an app.

Nadella introduced the case of Doosan Efficiency. An on-site worker at Doosan Efficiency said he found Microsoft’s power platform information on the Internet and created an app that efficiently manages images after learning it on his own. He stressed, “Now, there are more areas where civic developers can participate in digital transformation as much as professional developers.”

The fourth fate is ‘recharge the staff’. In other words, it allows employees to proceed with their work in a way suitable for the new era.

“A recent survey by Microsoft found that leaders were worried about their team’s productivity, while employees thought they were highly productive,” he said. “It shows that paranoid paradox exists.”

He emphasized staff retraining. The company should provide employees with more opportunities for the future and learning opportunities. Microsoft 365 Viva and Teams emphasized that they would be useful tools for him.

“The Teams app platform plays a key role in building and deploying LOB apps, and Teams is taking a leap forward through a mesh that accommodates metaverse,” he said. “The metaverse introduced to Teams will provide much more immersive future meetings in the future.”

“Viva can take a leap forward in human capital development,” he said. “It brings insights to team members and managers, strengthens connections between front-line employees and headquarters, and aligns employees’ goals with organizational culture goals to promote growth.”

He introduced E-Mart as a domestic example. E-Mart has created an app called Microsoft Viva to link the goals of its headquarters and front-line employees to one. E-Mart shares its schedule by creating an app that checks in and out with Power Apps. It facilitated collaboration and efficient management of managers.

Regarding the fifth fate, “Accepting Collaborative Business Processes,” he predicted, “We have focused on SaaS apps and clouds, and now the next transition is approaching,” adding, “All business apps will have a collaborative nature, be AI-based, and connect the digital and physical world.”

He explained about evolving business processes by melting AI and metaverse in customer experience, service, finance, and supply chain management with Dynamics 365.

Industrial metaverse provides an opportunity to narrow the gap between the physical world and the debridement world in the future, he said. “The IoT sensor capabilities make digital twins, whether in warehouses or factories, and allow automation to proceed, raising efficiency and productivity to the next level.”

He introduced the case of ‘Klo’, a domestic fashion platform company. Chloe, who produces fashion products, created a collaborative system. It is a series of systems that make clothing in a digital environment and make real physical samples. It has a system that performs all supply chains, logistics, material selection, and simulations on digital twins and produces actual goods.

Regarding the sixth digital destiny, “Security,” he stressed, “In order to take advantage of all technologies, cybersecurity costs must be operated efficiently,” adding, “By 2025, the cost of cybercrime is expected to reach $10 trillion, and it is a problem that everyone needs to deal with.”

Cybercrime is becoming more complex because the types of solutions are diversified and fragmented, he said. “To respond to cybercrime, we need to bring intelligence and take an integrated approach for it.”

He introduced Celltrion as a security case. Celltrion uses Microsoft Defender to protect its developing solution from the outside world.

CEO Satya Nadella said, “Digital fate can create many differences in the present era and further develop the economy,” referring to “Lunit,” a Korean lung cancer diagnosis AI development company. “Lunit is a company that has grown in Korea, and it is said to have distributed the most in Thailand and Egypt,” he said. “It is an example of a company that can impact not only Korea but also the world, and Microsoft helps achieve its organizational mission with everyone on Earth.”