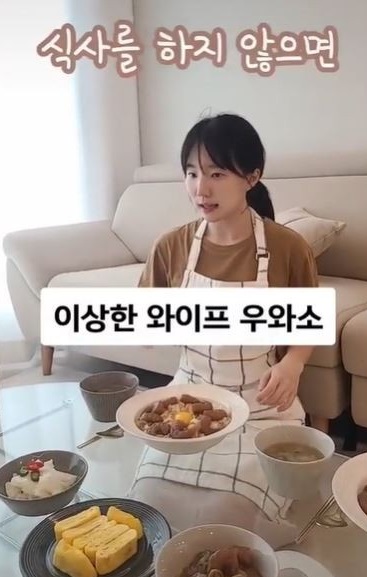 Netizens are angry with the public over the TikTok video parodying “Strange Lawyer Woo Young-woo.”

Recently, a video posted by a TikTokker woman under the title of “Woo Young-Woo’s Video Parody on TikTok these days” was posted on the entertainment community site, drawing attention.

In the video, a female TikTokker reproduced the scene of her husband preparing a table and recommending him to eat, saying, “It’s a strange wife, Woosso,” exactly like Woo Young-woo (Park Eun-bin). It was a parody video intended to make people laugh, but the reaction of netizens who saw it was unusual. He expressed displeasure, saying, “This is a video that makes fun of disabled people like Woo Young-woo, who suffers from autism.”

The owner of the TikTok account actively explained the controversy. “It’s a parody video,” Woosso said. I don’t think it’s fun to demean autism symptoms. I think they like Woo Young-woo because he is similar to the character, and we also made it with that intention. If we were a ridiculous caricature of autism itself, even our subscribers who liked us wouldn’t have tolerated it. Therefore, I hope you don’t misunderstand like this.”

Nevertheless, Durku community users are raising their voices of criticism: “No shame at all?” “We call it a caricature to copy the socially disadvantaged as cute or lovely,” “How can you crush the drama’s intentions so much?” “It’s like a great sophistry,” “familiar and lovingly mocked.”