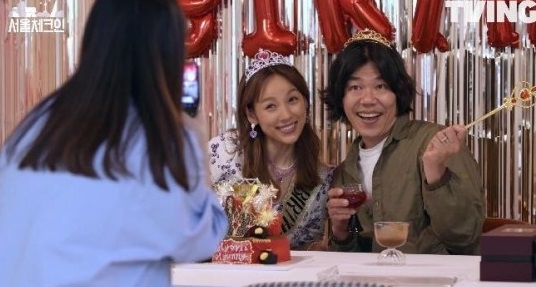 Lee Hyo-ri will open the door of “Seoul Check-in” Part 2 with a happy Seoul date with Lee Sang-soon and a special birthday party with Hong Hyun-hee and Jason.

In the seventh episode of the TVing original “Seoul Check-in” (directed by Kim Tae-ho, Kim Hoon-beom, Kang Ryung-mi/writer Choi Hye-jung/provided TVING), which will be released on the 3rd, Lee Hyo-ri enjoys an exciting Seoul date with her husband Lee Sang-soon.

On this day, Lee Hyo-ri visits an Oyster bar in Gangnam, Seoul, to meet someone she is happy to see. The person who appeared after waiting is Lee Sang-soon, her husband who she met after finishing their schedules in Seoul, and she appears with a bouquet of flowers, showing off her romantic side to Lee Hyo-ri, saying, “You’re so pretty today.” Lee Hyo-ri properly shows the chemistry of the real-life couple, such as not being able to hold back her laughter at her husband’s cute praise.

In particular, Lee Hyo-ri, Lee Sang-soon, Hong Hyun-hee and Jason, the representative lovers of the entertainment industry, are said to share possible conversation topics and empathy talks on marriage because they are a couple’s meeting, drawing keen attention.

In addition, the poster released shows a picture of Lee Hyo-ri’s new Seoul story at a glance, which marks the beginning of Part 2. In addition to the happy birthday party with the “Hong-Bun couple,” some still cuts that make people look forward to Lee Hyo-ri and AKMU Lee Chan-hyuk’s music work were released, raising expectations for their soon-to-be-veiled “Free Smile” project.

Episode 7 of the original TVing “Seoul Check-in,” which will feature a pleasant chemistry with the meeting of the entertainment industry’s representative wannabe couples, will be released on TV on the 3rd