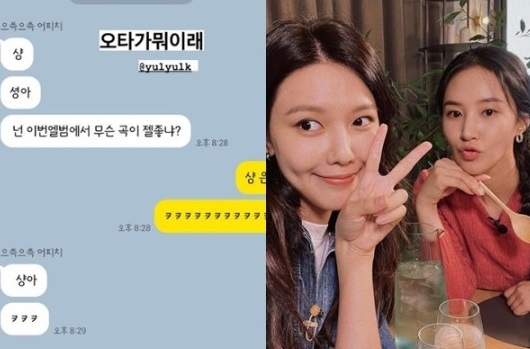 Members of the group Girls’ Generation showed off their strong friendship.

Sooyoung released part of the chat room on August 1 by tagging its member Yuri on her personal SNS.

Yuri asked, “Xiang,” “Syung-ah,” and “What’s your favorite song in this album?” and Sooyoung burst into laughter, “What’s Xiang?” It should be referred to as “Syung” in short of “Swimming,” but there was a typo.

In this regard, Sooyoung reacts with her real friend, saying, “What’s wrong with the typo?” drawing laughter.

Meanwhile, Choi Soo-young, who debuted as the group Girls’ Generation in 2007, recently appeared in JTBC’s “Run On” and the web drama “So I Married Anti-Fan.”

Also, he has been in a public relationship with actor Jung Kyung-ho for nine years.

Girls’ Generation, which includes Sooyoung, will release its seventh full-length album “FOREVER 1” through each music site at 6 p.m. on the 5th