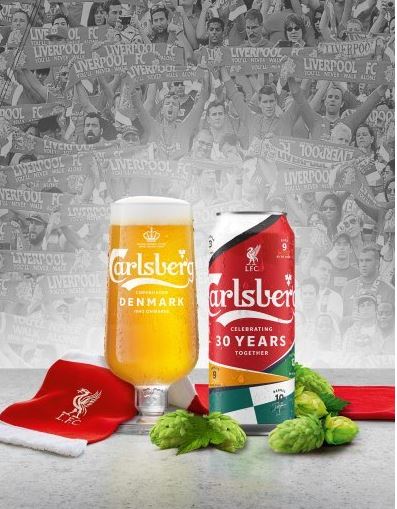 Golden Blue, which leads the domestic liquor culture, announced on the 7th that it will release a limited edition (Carlsberg & Liverpool Limited Edition) for the 30th anniversary of the Carlsberg & Liverpool FC partnership and start selling it in earnest. The edition was designed to commemorate the 30th anniversary of the signing of the partnership between the Danish royal beer “Carlsberg” and the prestigious English soccer club “Liverpool FC.”

Carlsberg has been an official partner of Liverpool FC for 30 years since 1992. He also played the role of the main sponsor of the uniform worn by the players. Wearing the Carlsberg emblem, Liverpool FC wrote the “Miracle of Istanbul” in the 2005 UEFA Champions League final. Liverpool, which was losing to AC Milan by three points, tied the score and won the penalty shootout, calling the match Istanbul’s miracle. It is considered a great game by many soccer fans.

In this limited edition of Carlsberg, the names, back numbers, and signatures of six legendary players who played for Liverpool were inserted in designs throughout the label. The color of the uniform worn by the players at the time was used as the main color. It consists of 500ml cans and has a dedicated phrase at the bottom of the can to commemorate the 30th anniversary of the partnership. Liverpool FC emblem, which symbolizes the team, is applied to the top. The special design maximizes the value of the collection.

Carlsberg beer is 100% malt lager beer, pale golden and boasts a rich bubble. It is characterized by a unique “micro bubble” created by fine bubbles.

Kim Dong-wook, CEO of Golden Blue, said, “We have planned a limited edition package to repay consumer support for Carlsberg. We will continue to carry out various activities using Carlsberg to provide consumers with differentiated enjoyment and different experiences.”

Carlsberg Liverpool Limited Edition will be sold at major convenience stores nationwide and large discount stores such as E-Mart, Lotte Mart, and Homeplus until inventory is exhausted.

Meanwhile, Golden Blue has imported and distributed Carlsberg beer since 2018. It has raised sales and brand image through various marketing activities such as sponsoring music festivals and operating pop-up stores. It continues to grow in double digits every year in the increasingly fierce domestic imported beer market. During the 2022 FIFA Qatar World Cup, which will open on the 20th, it will also create a pleasant atmosphere and carry out various activities to meet public interest.